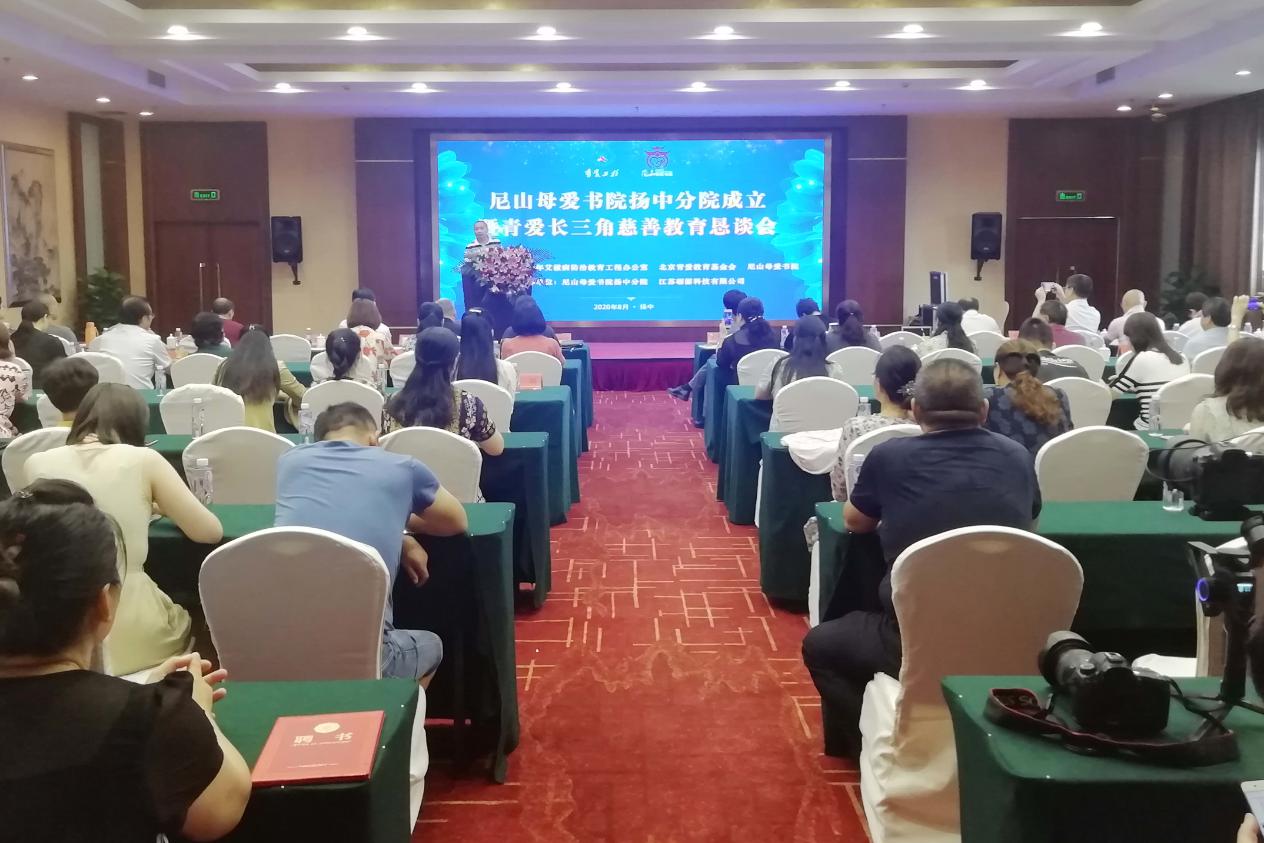 Sponsored by the AIDS Prevention Education Project for Chinese Youth (APEPCY) Office, Beijing Changier Education Foundation, and Nishan Academy of Maternal Education, and organized by the Nishan Academy of Maternal Education Yangzhong Branch and Jiangsu Liyuan Technology Co., Ltd., the inauguration of the academy’s Yangzhong branch and the charity meeting of APEPCY in the Yangtze River Delta were held in Yangzhong City in southern China’s Jiangsu Province on August 8, 2020.

The event was joined by Zhang Yinjun, deputy director of the Women and Children Committee of the China Association for Promoting Democracy, director of the APEPCY Office, director-general of the Beijing Changier Education Foundation, and dean of the Nishan Academy of Maternal Education, Zhang Lufa, executive dean of the Yangtze River Delta Health Research Institute and deputy dean of China Institute for Urban Governance and the School of International and Public Affairs of Shanghai Jiaotong University, Gao Shuqun, former deputy director of Shandong Provincial Cultural Heritage Administration, former executive secretary-general of Nishan Forum on World Civilizations, superintendent of the Nishan Academy of Maternal Education, and strategy consultant of APEPCY, Wu Yunxiao, founder of Shanghai Yongshan Society and founding partner of Yongchuang Capital, Hua Xiaoning, general manager of Wuxi Lingshan Group and vice chairman of the Nishan Academy of Maternal Education, and Zhao Liangjun, ambassador and strategy consultant of APEPCY, as well as representatives from academia, business sector, charity and media in the Yangtze River Delta and across the country, and officials and school principals in Yangzhong City.

The meeting was chaired by Xing Haiyan, secretary-general of the Beijing Changier Education Foundation.

Zhang Lufa said that since 15 more cities have just been included into the Yangtze River Delta city cluster according to national development strategy, it is good timing for APEPCY and the academy to expand their charity cause in the region in an effort to boost the sound development of the city cluster. Building the area into a world-class city cluster needs joint efforts from multiple stakeholders.

Wu Yunxiao said education of women makes a big difference to a country’s future. Committed to the rights and interests of women, children and youth, who are the core of charity and education work, APEPCY and the academy will join hands to inject new vitality to the Yangtze River Delta region.

Zhao Liangjun stressed that education nourishes human souls. He hopes the academy serves as a cultivator of happiness, guardian of health, inheritor of civilization and disseminator of culture.

Zhang Yinjun reviewed the 15-year history of APEPCY and their original aspiration to set up the academy. She said that the Yangtze River Delta city cluster is one of China’s most economically developed and densely populated regions with the greatest development potential. It is the obligatory mission of APEPCY and the academy to protect teenagers from HIV/AIDS and other infectious diseases and promote the mental and physical health of women and children in the Yangtze River Delta.

Zhang added that the essence of education is the unity of knowing and doing. APEPCY and the academy will explore ways to develop the cause of charity and education in the region, mainly targeting at women and juveniles, so mothers can guide their children to know and do what is good.

The participants discussed APEPCY’s charity plans in the Yangtze River Delta, which can be divided into four parts. First, APEPCY will establish a think tank to instruct the charity, cultural and educational undertakings; Second, APEPCY will set up more libraries in the 41 cities in the region; Third, it will organize lectures and classes on physical and mental health of youth; Fourth, it will hold mothers’ meetings aimed at building a female-led volunteer team.

During the meeting, participants also exchanged views on APEPCY’s work in the Guangdong-Hong Kong-Macao Greater Bay Area and the Tibet Autonomous Region.

On the sidelines of the second Nishan World Women’s Forum (NWWF) in 2016, Xu Jialu, Gu Mingyuan, Liu Chuansheng, Zhang Yinjun and Sally Kader, president of the U.S.-based International Federation for Peace and Sustainable Development, jointly founded the Nishan Academy of Maternal Education, a non-profit educational institution dedicated to the promotion of maternal love and parent-child education in Confucius’s hometown Qufu in Shandong Province under the guidance of the Nishan Forum on World Civilizations and the NWWF Organizing Committee and the support of the UN Women China, the provincial government of Shandong and people from all walks of life. Zhang Yinjun, chairwoman of the Beijing Changier Education Foundation and executive director of NWWF, serves as the dean of the academy. The Nishan Academy of Maternal Education has so far set up a total of 10 branches, two libraries, one reading center and one workshop.