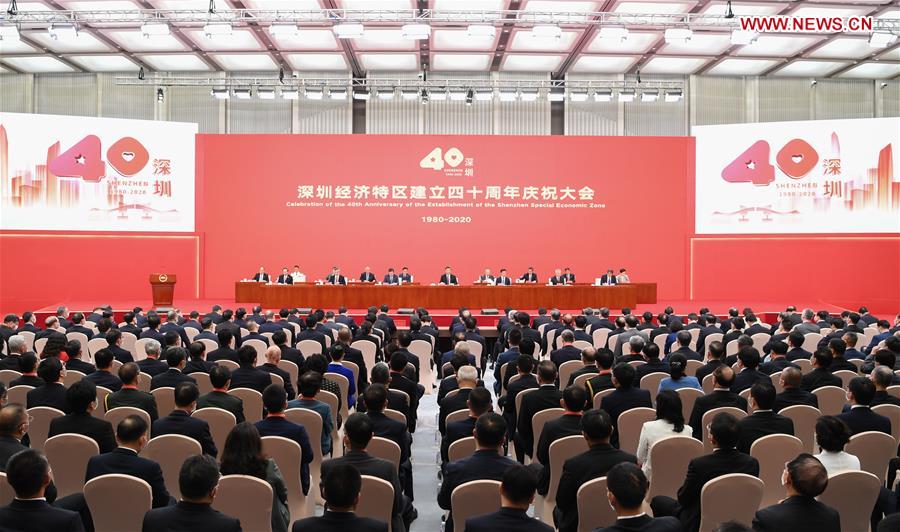 A grand gathering is held to celebrate the 40th anniversary of the establishment of the Shenzhen Special Economic Zone in Shenzhen, south China's Guangdong Province, Oct. 14, 2020. Chinese President Xi Jinping, also general secretary of the Communist Party of China Central Committee and chairman of the Central Military Commission, attended the gathering and delivered an important speech. (Xinhua/Zhang Ling)

SHENZHEN, Oct. 14 (Xinhua) -- China on Wednesday held a grand gathering to celebrate the 40th anniversary of the establishment of the Shenzhen Special Economic Zone (SEZ) in southern Guangdong Province as the country embarks on a new journey toward socialist modernization.

President Xi Jinping, also general secretary of the Communist Party of China (CPC) Central Committee and chairman of the Central Military Commission, attended the gathering and delivered an important speech.

The gathering started at 10:30 a.m. with participants singing together the national anthem.

Hailing Shenzhen's development over the past 40 years as "a miracle in the world development history," Xi said the establishment of SEZs is a great innovative move made by the CPC and the country in advancing reform and opening up as well as socialist modernization.

On Aug. 26, 1980, the Standing Committee of the fifth National People's Congress, the top legislature, approved the establishment of SEZs of Shenzhen, Zhuhai and Shantou in Guangdong Province and Xiamen in Fujian Province.

Since then, Shenzhen has transformed from a small backward border town into an international metropolis with global influence and a permanent population of over 13 million.

After four decades of rapid growth, Shenzhen now ranks fifth among Asian cities in terms of gross domestic product (GDP), which expanded at an annual rate of 20.7 percent to 2.7 trillion yuan (about 400.1 billion U.S. dollars) in 2019 from 270 million yuan in 1980.

Xi called on Shenzhen to build itself into a pilot zone for socialism with Chinese characteristics, set an example for cities of a modern socialist country, increase its capabilities to implement the new development philosophy, build a new pattern to deepen all-round reform and expand opening-up on all fronts, and contribute to the construction of the Guangdong-Hong Kong-Macao Greater Bay Area.

He urged the city to unswervingly implement the new development philosophy, achieve higher-quality development that is more efficient, fairer, more sustainable and more secure, and build itself into a global leader in technological and industrial innovation.

Shenzhen should deepen reform on all fronts, Xi said, noting that the CPC Central Committee supports the city in implementing pilot programs to deepen comprehensive reform.

He also encouraged Shenzhen to expand all-round opening up, calling for efforts to accelerate advancing opening up with institutional guarantees such as rules and norms, and explore a more flexible policy system and a more scientific management system in terms of domestic and foreign trade, investment and financing, finance and taxation, financial innovation, as well as personnel exit and entry.

He underlined the solid implementation of the people-centered philosophy of development in the reform and development of SEZs, with efforts to address issues in areas including employment, education, medical care, social security, housing, elderly care, food safety, ecology and environment, and public security.

Meanwhile, Xi asked Shenzhen to take active moves to further promote the construction of the Guangdong-Hong Kong-Macao Greater Bay Area, calling for efforts to synergize economic rules and mechanisms in the three regions and urging wider exchanges and deeper integration among young people in those regions to strengthen their sense of belonging to the motherland.