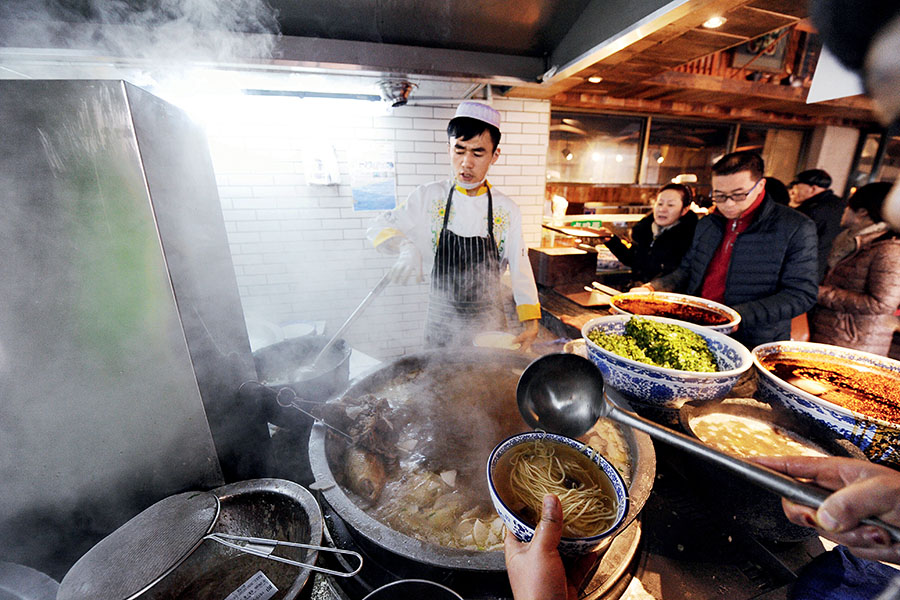 Lunch time is the busiest hours of a day for noodle chefs. Although it usually only takes about two minutes to prepare a bowl of noodles, the best still attract long queues. by Yang Yanmin

Northern China has traditionally cultivated wheat for a long time. In sharp contrast to their peers in the south, where the major staple is rice, people from northern China enjoy all manner of wheat products including dumplings, steamed buns, pancakes, nang (Uygur flatbread), and noodles, just to name a few. And of course, based on varying local cultures and customs, different sub-regions feature different specialties of wheat-based food.

Lanzhou hand-pulled beef noodles, named after their origin city in Gansu Province, are representative of northern China’s Muslim cuisine. Nowadays, those noodles are found not only across China, but also in Western metropolises on the other side of the world.

Just mentioning the hand-pulled noodles brings the city of Lanzhou to the minds of many Chinese people. And many visitors to Lanzhou come primarily for a bowl of authentic hand-pulled beef noodles.

Ma Zilu Beef Noodle Restaurant on Zhangye Road in Lanzhou’s most bustling commercial area is famous far and wide. Opened in 1954, the restaurant has eclipsed its competitors and attracted steady streams of visitors to the city. A strong beefy aroma radiates from the alley where the restaurant is located. Upon entering the simply-decorated eatery, diners witness the noodle-making process involving a lump of dough being repeatedly stretched until it multiplies into many strands of thin, long noodles. They are cooked in boiling water for 30 seconds, then sliced beef is added along with coriander, chopped garlic sprouts, chili oil and beef stock. In minutes, a bowl of amazing hand-pulled beef noodles is ready to serve. And chefs usually customize noodles to different thicknesses upon request.

You must arrive early to get a table at Ma Zilu Restaurant. Most hand-pulled noodle restaurants prepare their soup base and dough at night in preparation for an early morning opening. They close up for the day when they sell out. Ma Zilu Restaurant usually closes around 1:00 p.m.

Historical records show that Lanzhou hand-pulled beef noodles emerged during the reign of Emperor Jiaqing (1796-1820) of the Qing Dynasty (1644-1911). The origin of the dish is attributed to Chen Weijing, a student at the Imperial College, more than 200 years ago. Later, Ma Baozi, a member of the Hui ethnic group, improved the noodle making techniques. In 1919, Ma opened his own restaurant in Lanzhou, and long lines formed soon thereafter. His noodle making craft began spreading through Muslim communities in northwestern China including Gansu, Ningxia, and Qinghai. This version of hand-pulled beef noodles is characterized by crystalline soup, white daikon slices, red chili oil, yellowish noodles and green chopped garlic sprouts.

Presently, most hand-pulled noodle restaurants throughout China are not operated by Lanzhou locals or anyone with any connection to the city. Most Chinese have never heard of the Hualong Hui Autonomous County of Qinghai Province, but they have usually met a Hualong native: Most Lanzhou hand-pulled noodle restaurants are operated by Muslims from Hualong.

If you drive east from Lanzhou, you will eventually arrive in Qinghai Province after crossing the Yellow River. Haidong, a prefectural-level city in Qinghai, is home to abundant Muslim communities. The city administers four counties: Hualong, Minhe, Xunhua, and Huzhu, wherein Muslims account for more than 25 percent of the population.

Hualong sits on the upper reaches of the Yellow River in the transitional area between the Loess Plateau and the Qinghai-Tibet Plateau, at an average elevation of 2,600 to 2,800 meters. Its cold and arid climate is extremely unsuitable for agriculture, except for a few hardy species such as spring wheat, highland barley, pea, broad bean, and potato.

According to Hualong locals, Han Dong was the first native to leave the county to open a hand-pulled beef noodle shop elsewhere in China. Han was born into a poverty-stricken family that survived on only his father’s meager earnings as a construction worker. Because the family was frequently short of food, Han headed to Lhasa in the late 1980s to sell shoes with his father.

Han was tasked with purchasing shoes in the southeastern Chinese province of Fujian. He was struck by the lack of any Muslim restaurant near the train station of Xiamen, a coastal city in Fujian, despite the city’s status as a major transportation hub. Back to Lhasa, Han mentioned the void to his friend Ma Guifu, who worked for a hand-pulled noodle restaurant, and suggested they open their own noodle shop in Xiamen. Because Lanzhou hand-pulled beef noodles were more well-known and most Chinese were not aware of trademark consideration back then, Han named the small shop “Lanzhou Hand-Pulled Noodles.”

When the cuisine was still young, people from Qinghai learned the techniques from Lanzhou chefs. Today, Qinghai chefs still use the same traditional noodle-making methods and only vary the soup bases to customize tastes. Muslim food service workers from Hui and Salar ethnic groups make up the majority of the labor force in the industry.

Statistics show that people from Haidong operate about 21,200 hand-pulled noodle restaurants in 270 major and medium-sized Chinese cities, accounting for more than 70 percent of the country’s total. Of the 21,200 restaurants, 13,000 are owned by Hualong people, which inject revenues of 700 million yuan into the county every year.

All in a Name

Seeing Qinghai people shoot their own name to fame, Lanzhou had to do something. In 2009, the municipal government of Lanzhou registered the “Lanzhou hand-pulled beef noodles” as a trademark with China’s State Administration for Industry and Commerce. Contrasting the more common Qinghai-style restaurants that were usually small family-run operations, Lanzhou established big name brands to sell their hand-pulled noodles, and standard chain operations are the norm. Eventually, Lanzhou and Qinghai’s long fight over hand-pulled beef noodles rose to nationwide attention.

As for the question of whether Lanzhou or Qinghai noodles are more authentic, the answer should be a predictable draw: “Gansu and Qinghai are two neighboring provinces, both with abundant Muslim populations who shared very similar living and eating habits,” asserts an official with the Lanzhou Hand-Pulled Noodle Industrial Association. “Qinghai and Lanzhou hand-pulled noodles don’t actually taste much different from each other.”