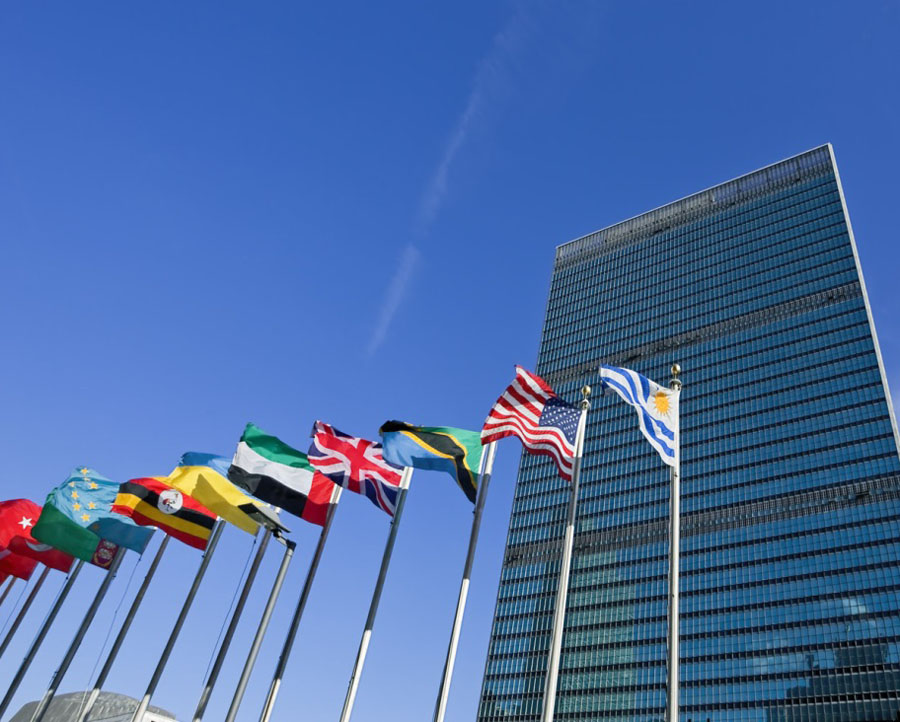 UN headquarters in New York City. As its name implies, the United Nations was founded to foster unity to meet challenges facing all countries around the world through concerted efforts. [Photo/Agencies]

At the 75thsession of the United Nations General Assembly, Trumpattacked China’s handling of the coronavirus pandemic,sayingthe world body“must hold accountable the nation which unleased this plague onto the world: China.”Again he used the racist term “China virus.”

Seventy-five years after its founding, the United Nations is facing an unprecedented challenge helping countries curb the pandemic. As its name implies, the United Nations was founded to foster unity to meet challenges facing all countries around the world throughconcertedefforts.However, a few top officials from the United States,which helped establish the UN, chose to use the venue to sow division.

Trump namedChina 11 timesabout handling of COVID-19 and environmental pollution but didn’t mentionthe pandemic crisis in his own country where more than 200,000 American have died so far—over 20 percent of the world’s recorded deaths from COVID-19 are in the United States. And the count of recorded infections is nearing seven million. According to the data from Johns Hopkins University Coronavirus Resource Center, by September 22, the United States accounted for more than one in every five coronavirus fatalities worldwide.

During Trump’s 7-minute speech at the UN alone, about four Americans died from the COVID-19 virus despite theadministration’s so-called “phenomenal job” offighting the virus.

Beijing surely could not agree less with the groundless accusations from the United States. “The U.S. noise is incompatible with the general atmosphere of the General Assembly,” said Zhang Jun, China’s permanent representative to the UN.

“When the international community needs solidarity and cooperation the most, the United States is abusing the platform of the UN to provoke confrontation and create division,” Zhang continued. “When the international community most needs a strong UN, the United States is weakening the UN, the World Health Organization (WHO), and other UN bodies, and undermining the authority and effectiveness of the UN.”

Trump’s remarks were also dismissed by other onlookers. The UK-based news outlet The Guardian called Trump’s UN speech “a bizarre feat of gaslightingand fantasy,” saying that “it only made sense if you see the world as Trump does—a world where he can do no wrong, and completely divorced from facts.”“Trump is sabotaging efforts to collectively tackle the pandemic and other threats that the UN was created to solve,” wrote Michael H. Fuchs.

Only a few months earlier,Trumpwas showeringpraise on Chinese President Xi Jinping for his government’s coronavirus response, as the outbreak was hittingWuhan.The president tweeted on January 24 that China “has been working very hard to contain” the coronavirus. On February 7, hetweeted that China “will be successful” in halting the outbreak and said of Xi’s management of the public health crisis: “I think he’s going to handle it. I think he’s handled it really well.” After a March 27 phone conversation with his Chinese counterpart, Trump tweeted that he had a “very good conversation” with Xi, writing: “China has been through much & has developed a strong understanding of the Virus. We are working closely together. Much respect!”

But when the outbreak in the United States gradually spun out of control and the Trumpadministration started receiving extensive criticism for its lacking response to the virus,blaming China became a good tactic. Trump admitted to Bob Woodward that he purposely downplayed the pandemic and its deadliness. In Woodward’s new book Rage,the president was recorded saying he knew the virus was “deadly stuff” in a February 7 interview. When asked why he wasn’t open about the threat, he said:“I’m a cheerleader for this country. I don’t want people to be frightened. I don’t want to create panic.”

This year marks the 75th anniversary of the founding of the UN. “To achieve international cooperation in solving international problems of economic, social, cultural, or humanitarian character…” is clearly written in the UN Charter. Especially in the protracted battle against the pandemic, now is the time for unity, and division will only worsen the situation.