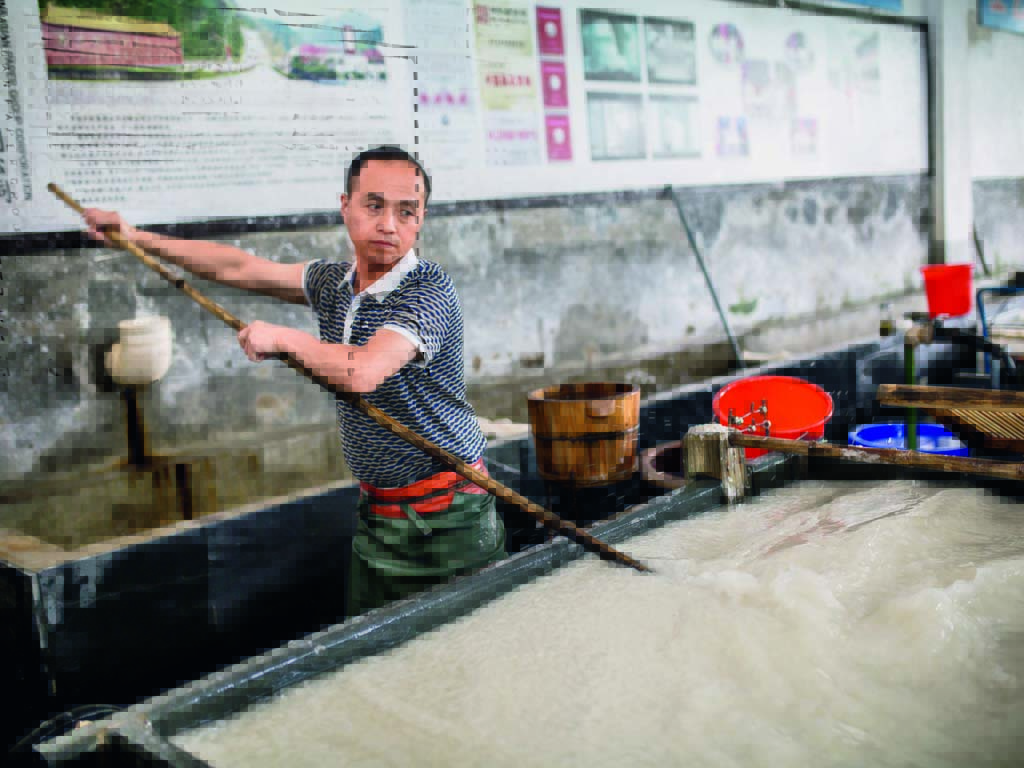 Zhou Donghong, a vatman in the China Xuan Paper Group Corporation, has been committed to making Xuan paper for over 30 years. His excellent skill has won him the title of “Master Craftsman.”

Vatman Zhou Donghong: Life of a Master Craftsman
Scan with wechat to share

During the summer of 1985, in a small, picturesque village in Anhui Province, Zhou Donghong, then 18, snuck back home after working for a week in a paper factory. He was sore from head to toe, and blisters covered his soaked hands. He wanted to quit. At the time, he could have never imagined returning to work there for more than three straight decades, but it eventually happened. He is now a famous craftsman with exquisite skill.

Calligraphy is an artistic treasure of Chinese culture, while Xuan paper (a traditional rice paper) shoulders the crucial task of carrying it. The manufacturing of Xuan paper is the jewel in the crown of China’s paper technology. From raw materials to finished product, each roll of Xuan paper undergoes 108 steps, and the full process can take up to three years. Creating a great Xuan paper craftsman takes even more years of hard work.

Donghong was born in Dingjiaqiao Town of Jingxian County, where Xuan paper originated and continues to be produced. In July 1985, Zhou decided he was ready to make a living on his own. Thanks to a recommendation from his uncle, he ventured into a local Xuan paper factory.

His uncle had taken him to visit the workshops of the entire factory. When they arrived at the workshop for vatmen, Zhou’s eyes lit up. Vatmen stood on either side of a water tank filled with paper pulp. Each clutched one end of a bamboo screen and swung it back and forth to “vat” a piece of paper. The entire process takes less than 20 seconds. “The workshop was cool and the process very simple,” Zhou recalls. “Each paper was made with two swings, so I thought I could do it.”

A week later, he realized that the seemingly easy task was far from it. He spent over ten hours every day standing next to the water tank, and blisters formed on his hands after being soaked in water for so long. Without telling his boss, he snuck back home. He dared not tell his mother either, and instead told her the factory was on holiday.

A week later, Zhou’s uncle found the missing child at home. When his mother heard the truth, she scolded him. Before learning paper vatting, Zhou had already worked for half a year as a carpenter. He considered it too exhausting and gave up. Zhou complained to his mother that “vatting paper is even harder than carpentry. You have to stand for over ten hours and get blisters all over your hands.” His mother replied, “You won’t do this or that, so what is it that you can do?”

Zhou reconsidered. “If someone else can do it, why can’t I?” he thought. Eventually, he headed back to the paper factory.

No Man Is a Master the First Day

Later, Zhou transferred to the Jingxian Xuan Paper Factory, the predecessor of today’s China Xuan Paper Group Corporation, to continue working. In this new environment, Zhou had a hard time finding a good mentor. Six months later, he had failed to master the essential skills of his job. He could vat paper, but the quality was not especially promising.

He and a colleague at the same level worked more than ten hours a day, but failed to complete their assigned tasks in the first two months. Paper-vatting pays by the volume of pieces produced, so he only received a nominal salary of around 20 yuan. After about eight or nine months, Zhou went home again and told his mother that paper-vatting did not earn enough money.

His mother retorted, “Why can others earn a living and not you?”

“How can you do your job well without settling down to learn?”

After more of his mother’s persuasion, Zhou returned again. This time, he got in touch with Mr. Shen, the best craftsman in the factory, and began learning from him. Shen was happy to teach him.

When paper is produced, unqualified products have to be beaten into paper pulp again, and the quality of rice paper made out of recycled pulp is even better. This time, Zhou made up his mind to learn the techniques well, and his talent as a vatman was gradually discovered.

It takes two people to vat paper, and one must lead. The person in charge is called Zhanglian, and the assistant is called Tailian. The rice paper quality depends primarily on the Zhanglian. Zhou was conscientious. When he vatted paper, he never hesitated to ask questions, and even asked his mentor for advice. After a period of time, the studious boy wanted to try his hand at serving as the Zhanglian. The factory had just recruited a number of apprentices, so he asked the masters to sleep in and let him wake up early to vat paper, with the apprentices serving as Tailian.

“The difficult part is being able to vat any type of Xuan paper, whether it’s supposed to be thick or thin, large or small.” Vatting paper evenly is not the only worry, because the weight must also be ensured. There are many varieties of rice paper, and the fixed weight of each type varies. Each piece has to weigh within a gram of a specified weight. Furthermore, the concentration of paper pulp is relatively high when it is first placed into the tank and gets diluted as more papers are vatted. How do vatmen guarantee that the thickness of paper is right when they vat with different concentrations of pulp? There is no way to accurately measure, leaving success entirely in the hands of the master.

“You can only feel with your hands, and it’s about coordination between two people. Whatever job you do, being the best at it is never easy,” Zhou says.

When paper is stacked after vatting, it is not supposed to have ﬂaws like bubbles or holes. Zhou had to learn how to avoid such imperfections himself.

After three years of practice from dawn to dusk, Zhou gradually became experienced. His master encouraged him to work as Zhanglian. “He thought I was ready to do it, but I was still nervous. But if I never tried, I could never succeed.” Soon thereafter, Zhou Donghong’s apprenticeship ended.

How are masters rated? “One measurable is the rate of finished products and another is percentage of paper that meets the requirements, and both criteria must be met,” Zhou explains. “Imperfect product is recycled into pulp again.” A month after finishing his apprenticeship, Zhou reached the skill level needed to serve as a Zhanglian master.

Responsibilities of Great Craftsmen of the Nation

Since then, Zhou Donghong’s skill has only increased, and he can now produce any variety of rice paper. In the 1990s, the factory began to produce many new products, and Zhou led the trials for a variety of innovative paper products.

Various awards followed; he was honored as a manufacturing expert and an advanced production worker, an “outstanding worker” of Xuancheng City and a model worker of the county and the province. In April 2015, he won the National May 1st Labor Medal. He was featured on CCTV in the same year and became a well-known craftsman across the nation. Many domestic calligraphers and painters now specifically ask for his rice paper.

Zhou first chose his career simply to make a living, but he eventually came to understand why ancient rice paper production methods are treasures passed down by our ancestors and remain part of the wealth of the Chinese nation. Passing on the ancient art is Zhou’s greatest concern now.

In 1989, Zhou Donghong welcomed his first apprentice, who is now the senior technician of the factory. So far, he has trained more than 20 apprentices, but more left than stayed. “Vatting paper is hard work,” he sighs. “It requires a high output and long working hours—around 14 to 15 hours a day. My best run was 35,000 pieces of rice paper in a month.” After working the job for more than three decades straight, Zhou knows better than anyone how hard it is.

In winter, a bucket of hot water sits alongside the water tank. Because a substance in the paper pulp is affected by temperature, the vats have to use cold water even in winter. Vatmen dip their bare hands in the hot water from time to time to ease the pain. The workshop is perpetually humid and few can escape ﬂare-ups of arthritis.

Zhou and his colleagues are aging, while fewer and fewer youngsters are interested in learning to vat paper. “You’re already over 50—how long are you planning to continue vatting paper?” his wife teases him.