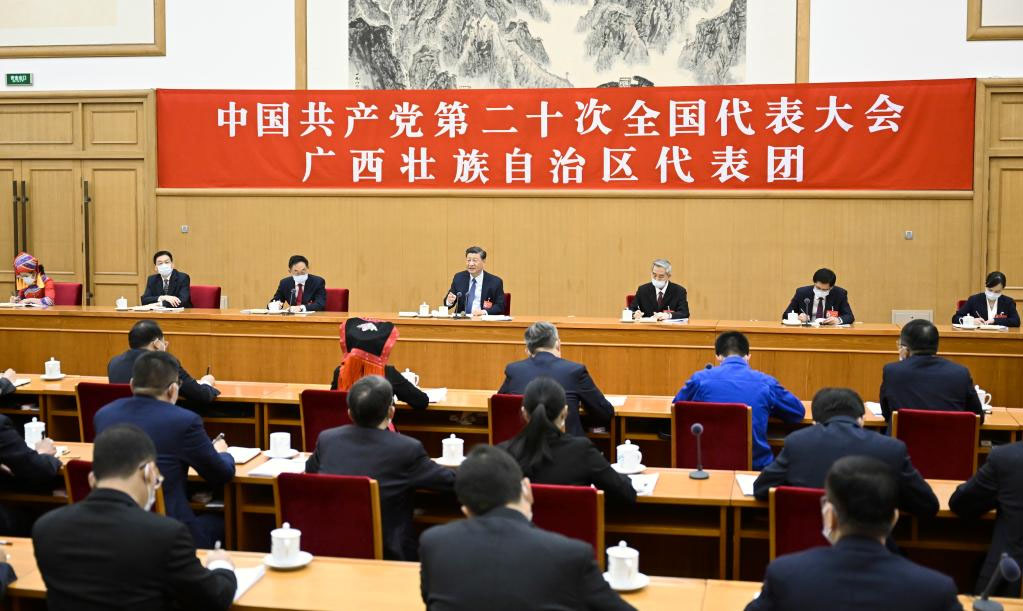 Comrade Xi Jinping on October 17 joined a group discussion with delegates from Guangxi Zhuang Autonomous Region who are attending the 20th National Congress of the Communist Party of China (CPC). During the discussion, he stressed that the report to the Party's 20th National Congress further charts the way forward for the cause of the Party and the country, and it will serve as a political manifesto and guide for our Party to unite and lead the Chinese people of all ethnic groups to uphold and develop socialism with Chinese characteristics on the new journey in the new era.

Xi said that, to study and implement the spirit of the Party's 20th National Congress, we need to have a good command of the importance of the work of the past five years and the great changes in the first decade of the new era, of the worldview and methodology of the Thought on Socialism with Chinese Characteristics for a New Era, and of our mission to advance the great rejuvenation of the Chinese nation through a Chinese path to modernization. We should also keep firmly in mind the important requirement of using the great transformation of our own to navigate the great social transformation and the call of the times for us to strive in unity. The entire Party and all the Chinese people need to unite as "one piece of adamantine iron" under the banner of the Party and stay committed to the same goal in mind and action to steer the giant ship of our great rejuvenation, braving winds and waves, toward its destination.

Five delegates of the Guangxi delegation -- Liu Ning, Lan Tianli, Zhou Jiabin, Zhu Xuelan and Zheng Zhiming -- gave their opinions on the report to the congress based on reality and their own experiences. They gave speeches respectively on issues of striving to follow the Chinese path to modernization in Guangxi, fostering a strong sense of community for the Chinese nation, preserving the landmark natural landscape in Guilin, developing agricultural industries with local characteristics, and deepening efforts in independent innovation. They all believe that the report to the 20th CPC National Congress, from a commanding height in considering both China's national rejuvenation and global changes of a magnitude not seen in a century, scientifically lays out goals, tasks, and major policies for developing the cause of the Party and the country in the next five years or even longer period to come, putting forward a series of new approaches, strategies and measures. It will serve as a guiding document for us to build China into a modern socialist country in all respects and realize the second centenary goal. They expressed unanimous support for the report.

In a lively atmosphere, Xi exchanged views with delegates. Having listened attentively to them, Xi said that he was happy to join the discussion as a delegate of the Guangxi delegation. He extended his sincere greetings to all delegates present and over 2.5 million Party members as well as 57 million officials and residents of different ethnic groups in the region.

Xi noted, since the 18th CPC National Congress in 2012, the Guangxi Zhuang Autonomous Regional Committee of the CPC and regional government have implemented the CPC Central Committee's decisions and plans, and united and led the people of all ethnic groups in the region in promoting the Five-Sphere Integrated Plan and the Four-Pronged Comprehensive Strategy in a coordinated manner. Facing the grave challenges of global changes of a magnitude not seen in a century and the once-in-a-century COVID-19 pandemic, the regional Party committee and government have led the region in winning the critical battle against poverty, building a moderately prosperous society in all respects together with the rest of the nation, and bringing the comprehensive strength of the region to new heights. As a result, reform and opening up in the region has been deepened comprehensively, ecological system improved continuously, people's living standards raised considerably, and both urban and rural areas have taken on a new look. Great changes have taken place in Guangxi, which can find expression in deepened strict Party governance, solid ethnic unity, sound social stability and border security. These achievements represent successful practices of the Party's ethnic policies and the system of regional ethnic autonomy in the southern border region, vividly reflecting the great transformation over the past 10 years of the new era in our country.

The past five years and the first decade of the new era have been truly momentous and extraordinary in the development of the Party and the country, stressed Xi. As a Chinese saying goes: "One can't tell how hard it is to get things done unless he is fully engaged; a success may look easy but it takes painstaking efforts." In the past 10 years, by overcoming various hardships as if wading across treacherous waters, climbing over steep slopes and breaking through tough barriers, we have made a series of breakthroughs and milestone achievements in the cause of the Party and the country. Practices have proved that the CPC Central Committee's major principles and policies since the Party's 18th National Congress are absolutely correct, and the path of socialism with Chinese characteristics is a right way leading to sound and steady progress. It conforms to the realities of China, reflects the will of the Chinese people, and meets the requirements of the times. We must gain confidence and initiative from history, and present an "excellent answer sheet" to the people and the future on the new journey ahead.

Xi pointed out that in order to implement the Party's innovative theories, we need to gain a good command of their worldviews and methodology as well as make good use of their stances, viewpoints, and methods. The report to the 20th CPC National Congress stressed that we should always put the people first, maintain self-confidence and stand on our own feet, and constantly uphold fundamental principles and break new ground. We should also adhere to a problem-oriented approach, apply systems thinking, and maintain a global vision. Only through conscientious study and implementation of the above six points can we obtain a deep understanding of the reason, rationale, and philosophy governing these innovative theories. We should not only know their meaning, but also grasp their essence and carry them out in the whole process of the Party and the country's work on all fronts, noted Xi.

Xi stressed, in the new era, the Party has developed a deeper understanding, more mature strategies and richer practices for building a modern socialist country, and thus successfully advanced and expanded the Chinese path to modernization. The report to the 20th CPC National Congress elaborated on the characteristics and essential requirements of the Chinese path to modernization, Xi said. Taking deep root in China, the Chinese path to modernization is in line with our national conditions. We must always pursue the development of the country and the nation by relying on ourselves, take our country's destiny of development and progress firmly in our own hands, strengthen our confidence, uphold fundamental principles and break new ground so as to write a new chapter of building China into a modern socialist country in all respects.

Xi pointed out, since the 18th CPC National Congress, the CPC Central Committee has maintained its resolve and exercised full and rigorous self-governance in the spirit of "spending 10 years grinding a sword." Driven by a strong sense of mission, we have resolved to "offend a few thousand rather than fail 1.4 billion" and waged an unprecedented battle against corruption, thus forging a synergy in the Party's self-reform, said Xi. Exercising full and rigorous self-governance is a journey to which there is no end; the Party's self-reform is a ceaseless pursuit. We must persist in carrying out self-reform of the Party so as to ensure that it will never change its nature, its conviction, or its character and that the Party is always the firm core leadership guiding the cause of Chinese socialism.

Xi stressed, only in unity and through strenuous effort can we succeed. Since the 18th CPC National Congress, our Party has firmly relied on the people to stabilize the economy and boost development, fight against absolute poverty and build a moderately prosperous society, contain COVID-19 and resist other major disasters, as well as tackle challenges and defuse crises. We have overcome seemingly insurmountable obstacles and created impressive miracles one after another. The most important task at hand is to roll up our sleeves and work hard to put into action the major decisions and arrangements made at the 20th CPC National Congress and produce tangible results.

Xi hoped, under the guidance of the spirit of the 20th CPC National Congress, Party committees and governments at all levels in Guangxi will unite and lead officials and the people of all ethnic groups to fully and faithfully apply the new development philosophy on all fronts, resolutely implement the decisions and plans of the CPC Central Committee, and do a better job in promoting high-quality development of the border ethnic area. They should make greater breakthroughs in serving and integrating into the new development pattern, achieve greater progress in pursuing green development, contribute more to safeguarding national security, bring about more results in exercising full and rigorous self-governance of the Party, and strive to open up new prospects for building a magnificent Guangxi in the new era.