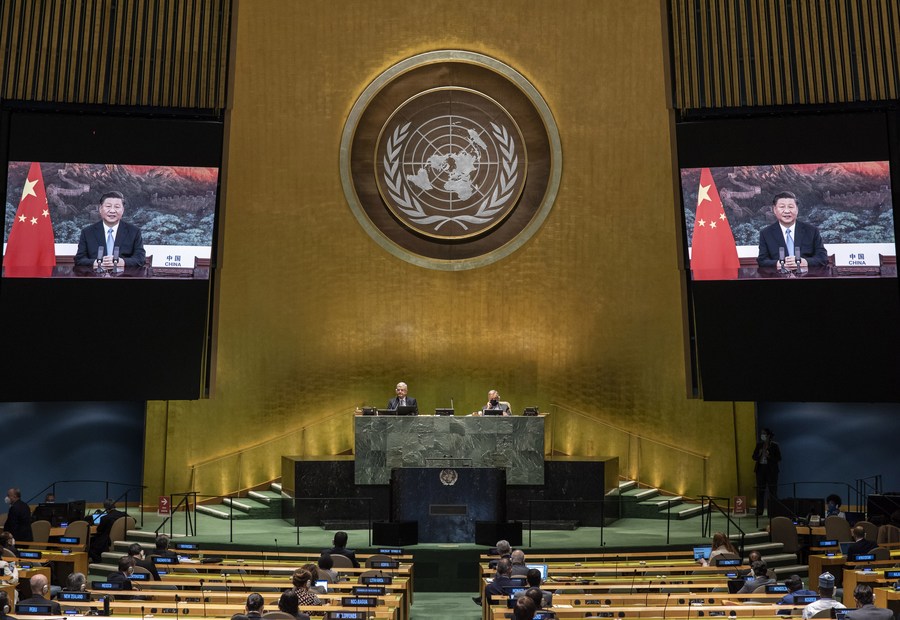 BEIJING, Sept. 22 (Xinhua) -- Chinese President Xi Jinping on Tuesday charted a course for the world to confront the COVID-19 crisis and meet more challenges in the future while addressing the general debate of the 75th session of the United Nations (UN) General Assembly.

The general debate was held virtually for the first time in the world body's 75-year-long history due to the coronavirus pandemic.

Noting that COVID-19 has ravaged the world and kept resurging, Xi said countries should put people and life first and enhance solidarity.

"COVID-19 reminds us that we are living in an interconnected global village with a common stake," he said.

"This is why we should embrace the vision of a community with a shared future in which everyone is bound together," Xi said, calling on countries to see each other as members of the same big family, pursue win-win cooperation, rise above ideological disputes and not to fall into the trap of "clash of civilizations."

"We should respect a country's independent choice of development path and model," he said.

No country can gain from others' difficulties or maintain stability by taking advantages of others' troubles, Xi said.

He added that any attempt of politicizing the pandemic or stigmatization must be rejected, saying countries should show concern for and accommodate the need of developing countries, especially African countries.

Xi's remarks once again show that solidarity and cooperation is the most powerful weapon in the face of COVID-19, said Ruan Zongze, executive vice president of the China Institute of International Studies.

In his statement, Xi said the economic globalization is an indisputable reality and a historical trend.

"The world will never return to isolation, and no one can sever the ties between countries," he said.

Xi called for full and balanced development that delivers benefit to people from all countries, sectors and backgrounds in an equitable way.

He also called on countries to pursue open and inclusive development, remain committed to building an open world economy, and uphold the multilateral trading regime with the World Trade Organization as the cornerstone.

"We should say no to unilateralism and protectionism, and work to ensure the stable and smooth functioning of global industrial and supply chains," said the president.

The pandemic reminds the world the humankind should launch a green revolution and move faster to create a green way of development and life, Xi said.

He called on countries to pursue innovative, coordinated, green and open development for all, seize the historic opportunities presented by the new round of scientific and technological revolution and industrial transformation, and achieve a green recovery of the world economy in the post-COVID era.

China will scale up its Intended Nationally Determined Contributions by adopting more vigorous policies and measures, said Xi, adding that China aims to have CO2 emissions peak before 2030 and achieve carbon neutrality before 2060.

"China's commitment to promoting an open world economy represents the historical trend of globalization and the general direction of world development, which speaks volumes about China's sense of responsibility as a major country," said Gao Fei, a professor at China Foreign Affairs University.

"We should stay true to multilateralism and safeguard the international system with the UN at its core," said Xi.

He said global governance should be based on the principle of extensive consultation, joint cooperation and shared benefits so as to ensure that all countries enjoy equal rights and opportunities and follow the same rules.

The global governance system should adapt itself to evolving global political and economic dynamics, meet global challenges and embrace the underlying trend of peace, development and win-win cooperation, said Xi.

Competition between countries should be positive and healthy in nature, and should not breach the moral standard, Xi said. He called on major countries to provide more global public goods, take up their due responsibilities and live up to people's expectations.

"We have no intention to fight either a Cold War or a hot war with any country," said Xi, adding that China will continue to narrow differences and resolve disputes with others through dialogue and negotiation.

In contrast, the act of certain countries seeking to provoke conflicts goes against the trend of history, Ruan said.

Instead of shying away from problems facing humanity, China is actively promoting a new type of better and balanced globalization, and contributing a "China plan" to achieving sustainable development for all UN member states, he said.